Use of this site indicates acceptance of the Privacy Policy and Terms of Use.
The information on this Website is not reliable and not intended to provide tax, legal, or investment advice. Nothing contained on the Website shall be considered a recommendation, solicitation, or offer to buy or sell a security to any person in any jurisdiction.
CEO.CA members discuss high-risk penny stocks which can lose their entire value. Only risk what you can afford to lose.
© 2022 - CEO.CA Technologies Ltd.
@accesswire/trifecta-gold-drills-303-gt-gold-over-2591-metres ↻
0 online
Today This week
Search Subscribe
Members of @accesswire/trifecta-gold-drills-303-gt-gold-over-2591-metres

Significant assays obtained from drilling at the Columbia Zone in 2021 and 2022 are tabulated below:

Including two historical diamond drill holes, seven of nine holes drilled at the Columbia Zone have intersected significant mineralization. Hole YU-21-01 was abandoned short of target depth while YU-21-03 appears to have been drilled on the north side of a fault that offsets the zone approximately 160 metres to the northeast based on surface showings and geologic mapping. The Columbia Zone remains open to extension in both directions along strike and to depth. 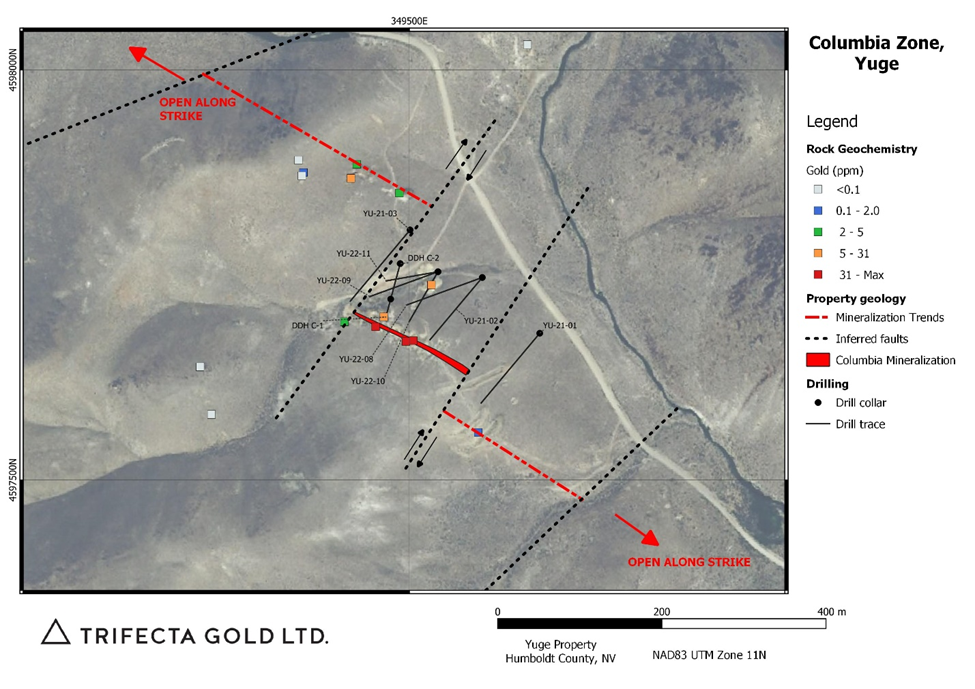 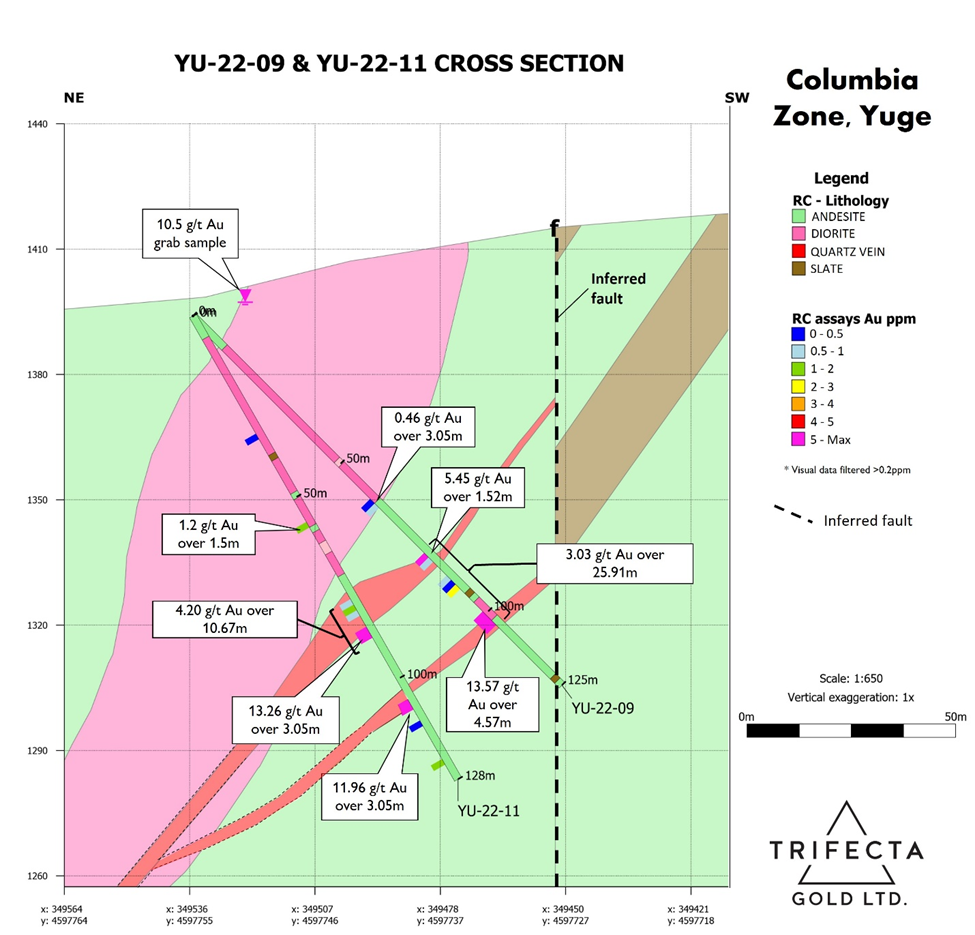 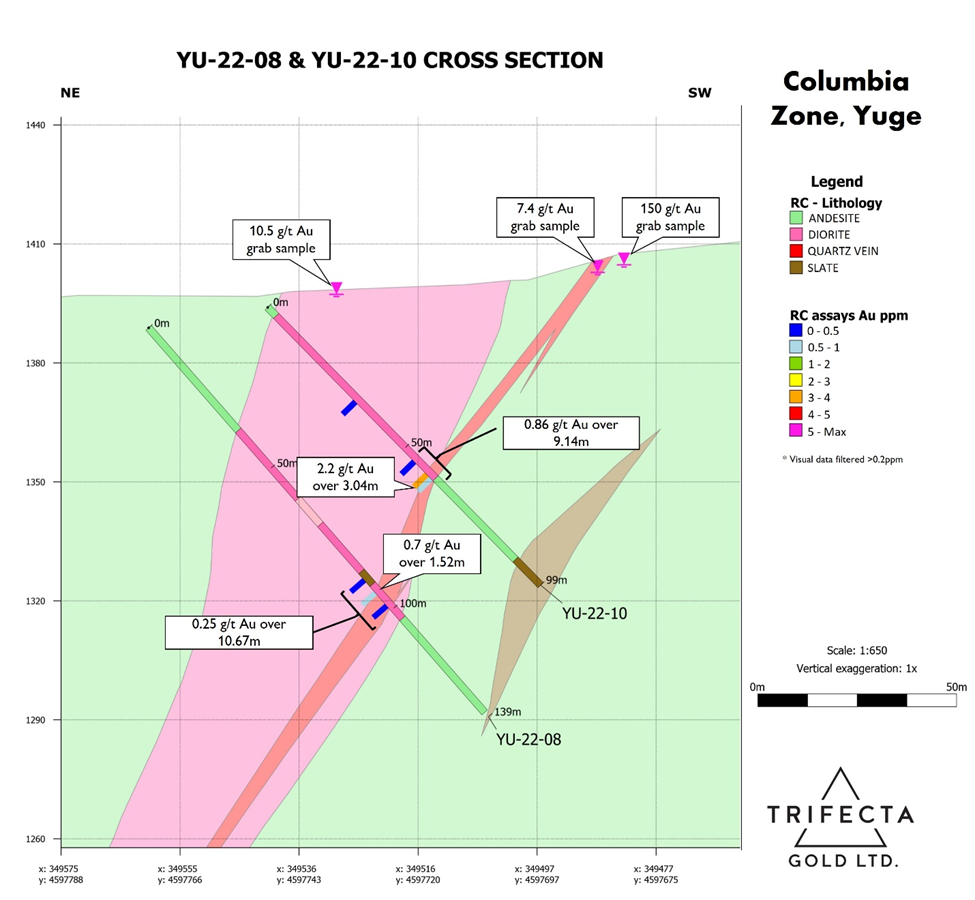 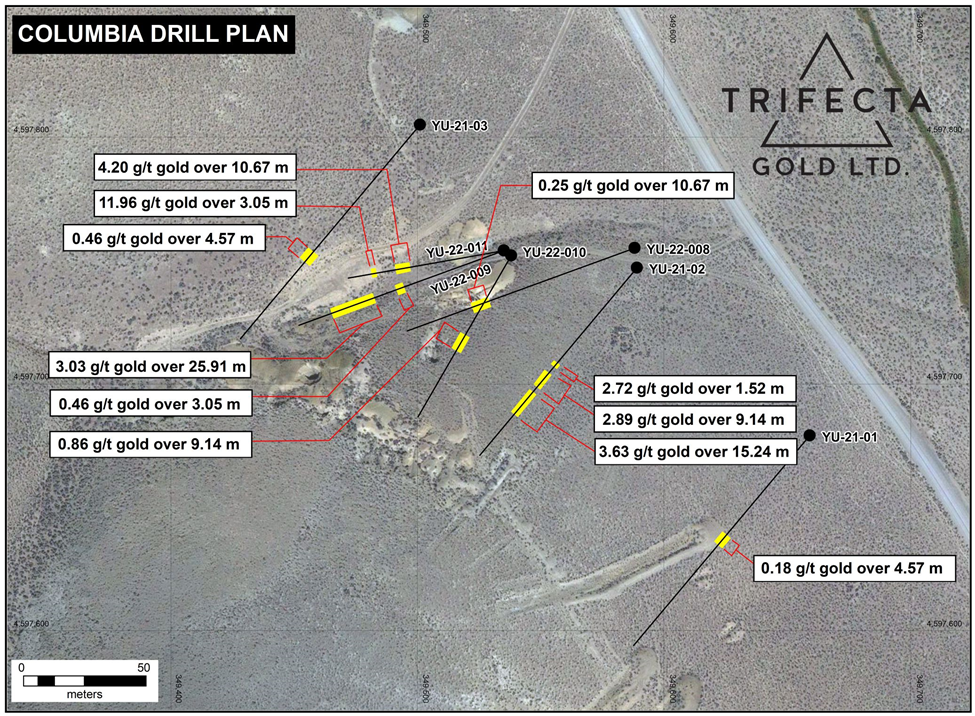 Significant assays from 2021 and 2022 drill holes at the Juanita Zone are tabulated below:

Holes YU-22-12 and YU-22-14 encountered a previously unrecognized fault that forced the early termination of both holes.

Results from soil sampling conducted during the 2022 drilling campaign have now been received and are being compiled along with data from previously completed geophysical surveys. These data are being modelled along with data from geological mapping, trenching and drilling and will be announced in a future news release that will also include plans for follow up exploration. 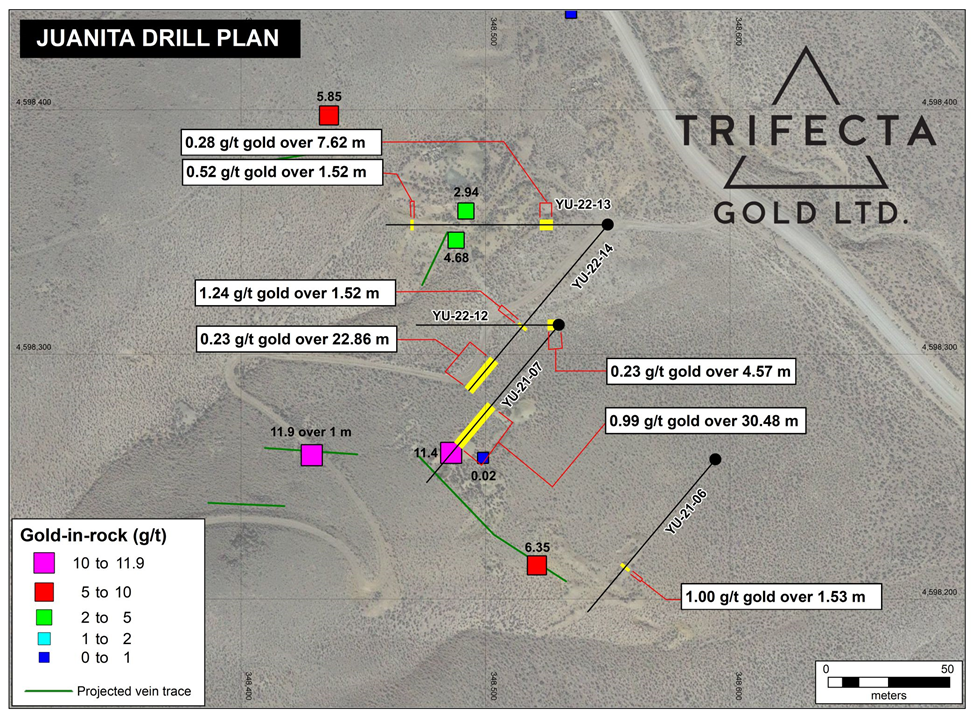 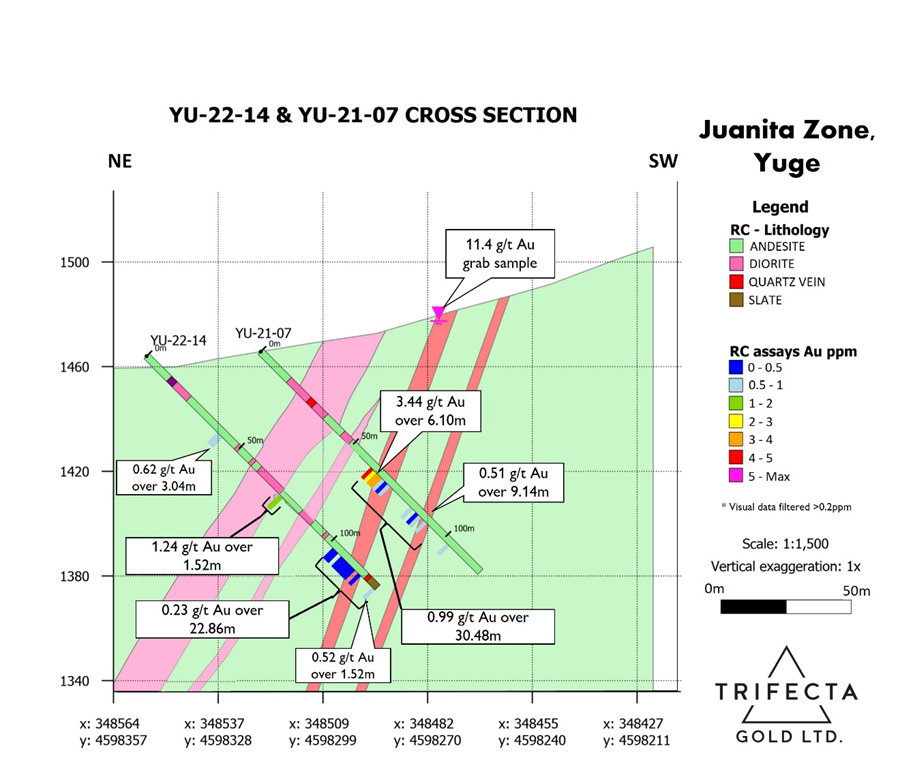 All analyses were performed by ALS Minerals in Vancouver, British Columbia. All samples were routinely analyzed for gold by a 50 g fire assay followed by atomic absorption (Au-AA24 or Au-AA26) and 48 elements by inductively coupled plasma-mass spectrometry (ME-MS61).

Historical data cited in this press release is based on reports by Homestake Mining Company, Westamerica Enterprises and Extension Energy Inc. This data has not been independently verified by Trifecta but has been checked for internal consistency and against Nevada Bureau of Mines and U.S. Bureau of Mines public domain data.

Technical information in this news release has been reviewed and approved by Matthew R. Dumala, P.Eng., a geological engineer with Archer, Cathro & Associates (1981) Limited and a qualified person for the purposes of National Instrument 43-101.

Trifecta is a Canadian-based precious metals exploration company dedicated to increasing shareholder value through the discovery and development of 100% held gold projects in Yukon and Nevada. Initial drilling at its Yuge Gold Project, located in northern Nevada, has identified multiple broad zones of gold mineralization near historical high-grade mines. The Company's Eureka Project hosts an 8 x 2.5 kilometre belt of surface showings and anomalous gold-in-soil that straddle the headwaters of two of the most productive placer creeks in Yukon's southern Klondike Goldfields.

ON BEHALF OF THE BOARD

This news release may contain forward looking statements based on assumptions and judgments of management regarding future events or results that may prove to be inaccurate as a result of exploration and other risk factors beyond its control, and actual results may differ materially from the expected results.