Use of this site indicates acceptance of the Privacy Policy and Terms of Use.
The information on this Website is not reliable and not intended to provide tax, legal, or investment advice. Nothing contained on the Website shall be considered a recommendation, solicitation, or offer to buy or sell a security to any person in any jurisdiction.
CEO.CA members discuss high-risk penny stocks which can lose their entire value. Only risk what you can afford to lose.
© 2022 - CEO.CA Technologies Ltd.
@nasdaq/ranchero-gold-announces-advancement-of-comprehensive ↻
0 online
Today This week
Search Subscribe
Members of @nasdaq/ranchero-gold-announces-advancement-of-comprehensive

by @nasdaq on 25 May 2022, 06:30
Ranchero Gold Announces Advancement of Comprehensive Reconnaissance Program at Santa Daniela

VANCOUVER, British Columbia, May 25, 2022 (GLOBE NEWSWIRE) -- Ranchero Gold Corp. (“Ranchero” or the “Company”) (TSX.V:RNCH) is pleased to provide an update of its exploration program currently underway at its 100%-owned Santa Daniela gold concessions located within the prolific Sierra Madre Occidental gold belt in Sonora, Mexico. Ranchero has successfully augmented its previous reconnaissance targeting effort in partnership with GoldSpot Discoveries (GoldSpot). New targets have been identified and previously known targets have been further refined. Initial field visits have confirmed the presence of gold in surface sampling and the development of drill targets is on-going.

Bill Pincus, Chief Executive Officer and Director stated: “We have successfully completed targeting based on remote image interpretation and are now actively engaged in the field sampling and mapping new areas at our flagship Santa Daniela gold project. The work completed so far has been yielding positive results and we remain on track to identify new drill targets by year-end.”

“The Sierra Madre Occidental, where we are actively exploring, is a prolific gold belt that hosts multiple major mining operations and significant deposits. Exploration and development activities at our Maíz Azul prospect has already confirmed our first gold discovery at Santa Daniela. The addition of new prospects allows us to demonstrate the district scale potential of the greater Santa Daniela land package and further unlock value for our shareholders.”

These data sets were initially interpreted independently by GoldSpot experts and then integrated for the ML prospectivity analysis.

The GoldSpot ML prospectivity analysis uses ensemble learning, whereby multiple machine learning algorithms are used simultaneously to obtain better predictive performance. The input data layers (“training”) included Ranchero surface mapping and surface geochemical samples, largely from the Maiz Azul area. The results are “prospectivity scores”, which were generated for the entire concession block. A prospectivity score is the probability that any given pixel has the same signature as those identified as a “target” in the training analysis.

Results of the prospectivity score analysis are shown in Figure 2. This data is further refined by analyzing the “strength” of the prediction. The results of this analysis yield the final targets as shown in Figure 3 where some of which coincide with the PRS Aster/Landsat interpretation.

The combination of the PRS and GoldSpot analyses together with other geologic factors has led Ranchero to prioritize nine targets (Figure 4) which are now undergoing initial mapping and sampling. New results from field work in 2022 confirm the potential exploration upside of these targets.

Ranchero geologists have conducted prospect site visits using the results of both the 2020 ASTER/Landsat and 2022 GoldSpot ML studies. Figure 4 shows the location of on-going site visits where encouraging results have confirmed the potential of Rincon, San Francisco, and Yaqui Sur. Field work on the remaining prospects is expected in the upcoming months.

The Rincon prospect lies approximately eight kilometers south, southeast of Maíz Azul. It is characterized by the outcrop of volcanic agglomerate and ash units capped by more recent basalt flows. There are large areas of silica/clay alteration and numerous northwest striking quartz veins and veinlets up to 0.5 meters in thickness.

Initial rock sampling has yielded values of 0.92 g/t Au, 0.46 g/t Au and 0.16 g/t Au together with many samples with highly anomalous values of the indicator elements arsenic, barium and antimony. Ongoing activity will focus on more detailed mapping and sampling particularly in the western portion of the prospect.

Two holes were drilled by the previous operator in basalt units that Ranchero does not consider prospective. A subsequent geophysical survey (CSAMT), conducted by the operator, identified near surface resistive zones interpreted as possible hydrothermal alteration. These zones have not been tested by drilling.

San Francisco is located approximately four kilometers east of Maíz Azul. The prospect is dominated by a large (700 x 250 meter) dacite flow dome that is similar to the mineralized dacite body found at Maíz Azul. It displays both argillic and weak to massive silica alteration over wide areas. At higher elevations it is generally a clear silica with little iron oxide (i.e., altered sulfide). At lower elevations, the presence of iron-oxides is notable indicating that outcrops may be above a main mineralized horizon. The results of initial rock sampling have yielded anomalous gold values.

The next step of prospecting will be to expand mapping and sampling at lower elevation westward towards Maíz Azul.

The Yaqui Sur prospect lies only two kilometers south of Alamos Gold’s El Yaqui mine development project. It is underlain by tuffaceous and agglomerate rock units similar to those found at El Yaqui. Limited sampling has found anomalous gold values. Ranchero geologists have recently secured approval from the local landowners to access the full prospect and this will be the focus of near-term exploration.

Ranchero has two active field crews focused entirely on prospect generation. The objective is to complete rock sampling and mapping on the nine priority targets. Follow-up activity on these high priority targets will be results driven but would likely include systematic sampling, detailed mapping and possibly geophysical studies with the primary goal of drill target definition.

Field visits to the remaining prospects at Santa Daniela will take place subsequent to the work currently work underway at these nine targets. Ranchero’s goal is to identify additional new drill targets distinct from those at Maíz Azul.

Scientific and technical information in this news release has been reviewed and approved by William Pincus, CPG, who is a "qualified person" as defined by NI 43-101.

On behalf of the Board of Directors of the Company:
William Pincus
Chief Executive Officer and Director
303 589 3734

This news release contains certain forward-looking statements. Any statements that express or involve discussions with respect to predictions, expectations, beliefs, plans, projections, objectives, assumptions or future events or performance (often, but not always, using words or phrases such as “expects” or “does not expect”, “is expected”, “anticipates” or “does not anticipate” “plans”, “estimates” or “intends” or stating that certain actions, events or results “ may”, “could”, “would”, “might” or “will” be taken, occur or be achieved) are not statements of historical fact and may be “forward-looking statements”. Forward-looking statements contained in this news release include, but are not limited to, the final acceptance of the TSXV to the Transaction. 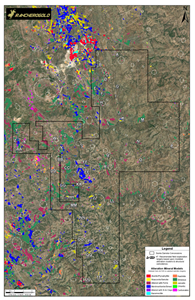 Presence of Hydrothermal Alterations at 47 Locations 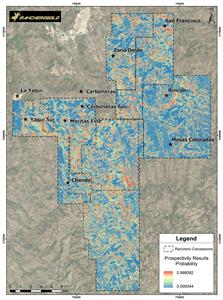 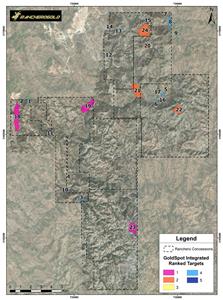 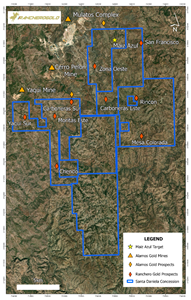