Use of this site indicates acceptance of the Privacy Policy and Terms of Use.
The information on this Website is not reliable and not intended to provide tax, legal, or investment advice. Nothing contained on the Website shall be considered a recommendation, solicitation, or offer to buy or sell a security to any person in any jurisdiction.
CEO.CA members discuss high-risk penny stocks which can lose their entire value. Only risk what you can afford to lose.
© 2022 - CEO.CA Technologies Ltd.
@newsfile/blackrock-silver-to-commence-drilling-district-scale ↻
0 online
Today This week
Search Subscribe
Members of @newsfile/blackrock-silver-to-commence-drilling-district-scale

by @newsfile on 4 Jan 2022, 07:00
Blackrock Silver to Commence Drilling District-Scale Targets at Its Tonopah North Project

The fully permitted and funded inaugural drill program will consist of 9,000 metres in twelve reverse circulation (RC) drillholes. The program will test two silver-gold concepts associated with the mapped margin of the Tonopah Caldera and the projection of major northwest structures, and the lithium potential within the middle and lower portions of the Siebert Formation.

Andrew Pollard, the Company's President and CEO, stated, "2022 is poised to be a pivotal year for the Company, as we focus on the simultaneous expansion and de-risking of our Tonopah West project (maiden resource expected during Q1) while we continue our search for new discoveries in the shadows of where historic miners left off nearly a century ago. With over 110,000 metres of drilling under our belt on the Tonopah silver district, which has sharpened our understanding of the key structural controls that shape this prolific silver-gold system and benefitting from technology that wasn't available to the old-timers, we've delineated multiple new targets with district-scale potential and are excited to finally test them with the drill-bit."

Extension of the Pittsburg-Monarch Fault System

Two drill sites (Sites A and B) have been permitted to test the extension of the Pittsburgh-Monarch fault system to the northwest. The two sites are located along the structural trend and correspond to an area showing a disruption in the gravity where the structures cut the proposed location of the Tonopah caldera margin.

In the main Tonopah district, the thickest and highest-grade silver is associated with the intersection of the east-west oriented veins and the Pittsburgh-Monarch fault system. At this intersection, the Victor vein had a width of 24 metres (80 feet) and the Ohio vein was 14 metres thick (50 feet). The goal of the drillholes on this target is to intersect the fault within favorable volcanic lithologies and intersection similar mineralization to the Victor and Ohio veins.

Sites G, H and I will test a second north-northwest structural zone imaged in the gravity and magnetic geophysical data sets. The drillholes test the interpreted structural zone inside and outside of the postulated caldera margin.

A total of five drill sites totalling 3,300 metres is planned to test these structural targets.

Based on magnetic data, structural lineaments and mapping, a large swath of east-west oriented structures are located on the north edge of the Tonopah caldera. The surface lithologies are comprised of outcrops Siebert Formation along the outer margin of the proposed Tonopah caldera. The geologic and structural setting look very similar to the Tonopah district which is located on the southern margin of the Tonopah caldera. The potential to identify a new district-scale target exists within the area. This large area would have been ignored by early prospectors because the volcanic lithologies exposed are post mineral in the main Tonopah district. A total of three drillholes (Sites J, K and L) are planned totalling 2,300 metres. 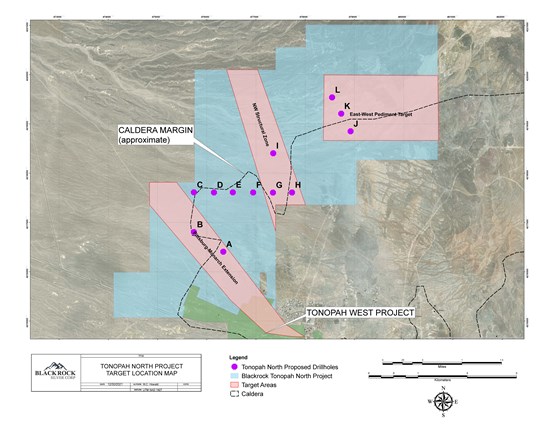 Blackrock's exploration activities at the Tonopah North Project are being conducted and supervised by Mr. William Howald, Executive Chairman of Blackrock Silver Corp. Mr. William Howald, AIPG Certified Professional Geologist #11041, is a Qualified Person as defined under National Instrument 43-101. He has reviewed and approved the contents of this news release.

Blackrock is a junior precious metals focused exploration company that is on a quest to make an economic discovery. Anchored by a seasoned Board, the Company is focused on its Nevada portfolio of properties consisting of low-sulphidation epithermal gold & silver projects located along the established Northern Nevada Rift in north-central Nevada and the Walker Lane trend in western Nevada. With over 110,00 metres of drilling completed at our flagship Tonopah West silver-gold project, the company plans to deliver a maiden resource estimate in Q1, 2022.

This news release contains "forward-looking statements" within the meaning of Canadian securities legislation. Such forward-looking statements concern the Company's strategic plans, timing and expectations for the Company's exploration and drilling programs, estimates of mineralization from drilling, geological information projected from sampling results and the potential quantities and grades of the target zones. Such forward-looking statements or information are based on a number of assumptions, which may prove to be incorrect. Assumptions have been made regarding, among other things: conditions in general economic and financial markets; accuracy of assay results; geological interpretations from drilling results, timing and amount of capital expenditures; performance of available laboratory and other related services; future operating costs; and the historical basis for current estimates of potential quantities and grades of target zones. The actual results could differ materially from those anticipated in these forward-looking statements as a result of the risk factors including the timing and content of work programs; results of exploration activities and development of mineral properties; the interpretation and uncertainties of drilling results and other geological data; receipt, maintenance and security of permits and mineral property titles; environmental and other regulatory risks; project costs overruns or unanticipated costs and expenses; availability of funds; failure to delineate potential quantities and grades of the target zones based on historical data, and general market and industry conditions. Forward-looking statements are based on the expectations and opinions of the Company's management on the date the statements are made. The assumptions used in the preparation of such statements, although considered reasonable at the time of preparation, may prove to be imprecise and, as such, readers are cautioned not to place undue reliance on these forward-looking statements, which speak only as of the date the statements were made. The Company undertakes no obligation to update or revise any forward-looking statements included in this news release if these beliefs, estimates and opinions or other circumstances should change, except as otherwise required by applicable law.

To view the source version of this press release, please visit https://www.newsfilecorp.com/release/108970